Counterfeit books have to be distinguished from international or Eastern Economy editions. Unlike the latter, they are produced illegally, and students sometimes happen to buy them on various marketplaces from third-party sellers because of lower prices (such books are often shipped from China, India, etc.) Afterward, students may try to sell these books to companies like Textbooks Buffalo, and we do not accept them for obvious reasons.

To help our customers (and everyone interested) spot counterfeit textbooks and not fall into the trap, we're posting the list of differences between genuine and illegal editions that need to be paid attention to:

1) Binding. It differs from the one of the authentic textbook. The glue can be of a different color and unevenly distributed along the binding, and the book may generally look poorly made. Books with bindings for which cheap glue was used also smell differently than an original quality edition. The curvature of the spine can also be different (e.g., too flat or bent). 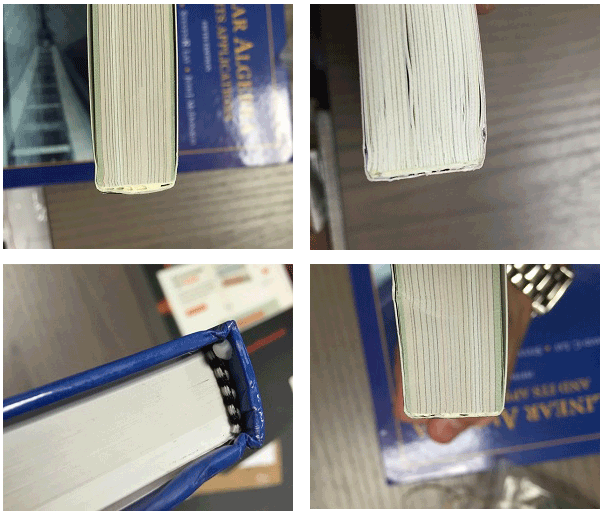 2) Pages and paper. In some cases, pages are thinner than they are supposed to be, and text from the next page is showing through. Original editions often have glossy paper, and counterfeits have cheaper plain paper.

Example #1: Page of a counterfeit book has different color shade: 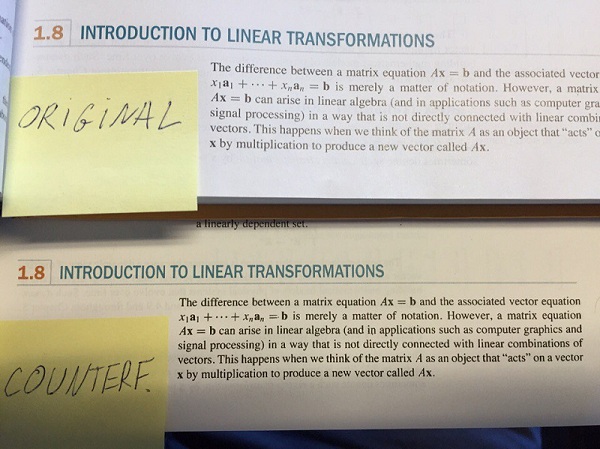 Example #2: Paper of the counterfeit book is plain instead of original glossy: 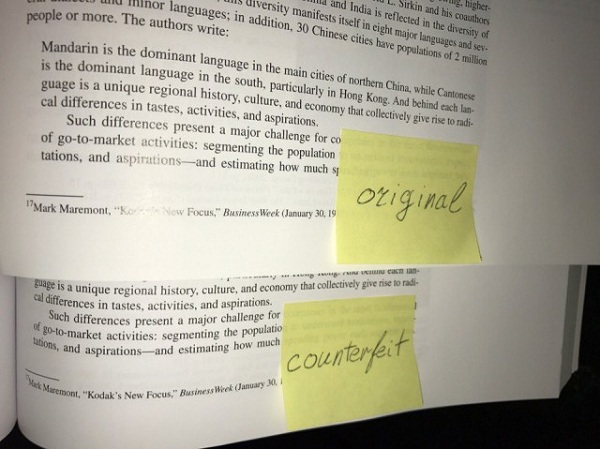 3) Width. Counterfeit textbooks often don't have the same width as the authentic ones, as illegal producers aim to use less paper. 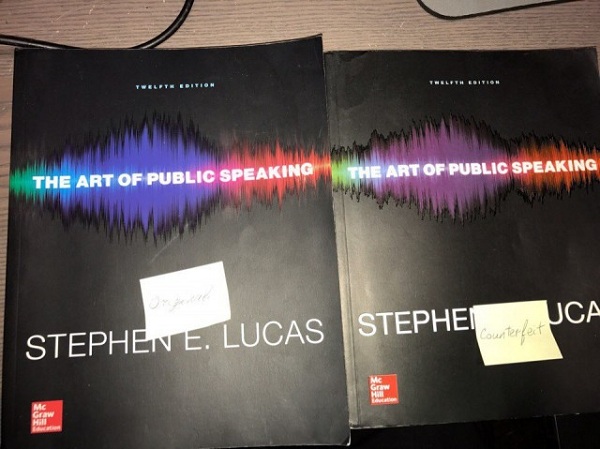 Example #2: Counterfeit book on the right is narrower: 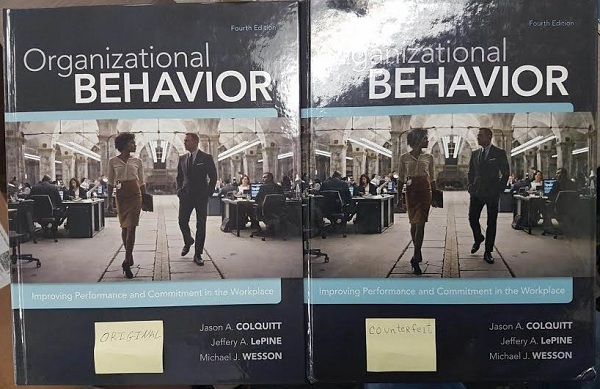 4) Thickness. Also, counterfeit books are sometimes thicker or thinner due to bad quality of the pages (see the example below).

Example #1: The counterfeit item is thinner: 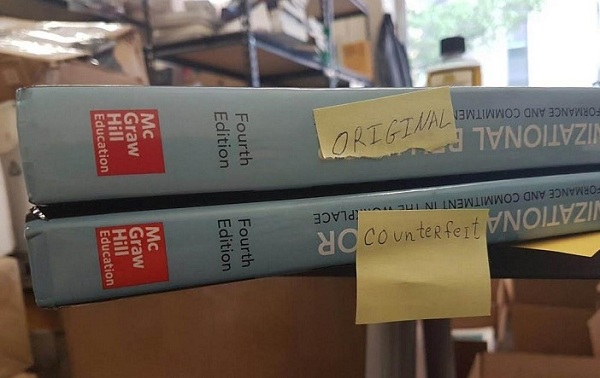 Example #2: The counterfeit item is thicker: 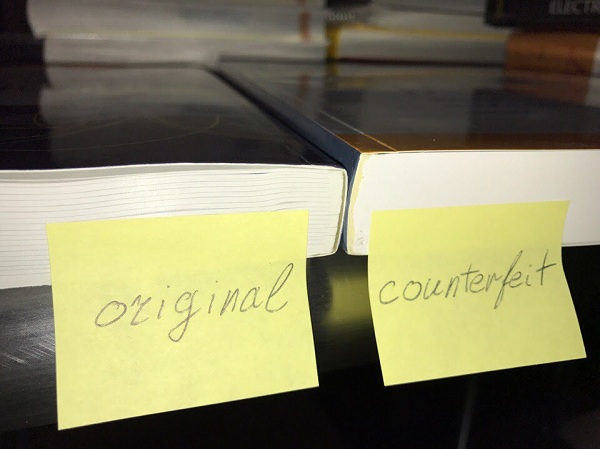 5) Quality. The cover art is often of lower quality as well, the name of the author and the title aren't vertically centered on the binding, and the writing may be a bit unclear or pixelated. Illustrations inside counterfeit books may be black-and-white or are somewhat bleak and look fuzzy.

Example #1: Side-by-side comparison of an original and a counterfeit. The item on the right has a different color tone: 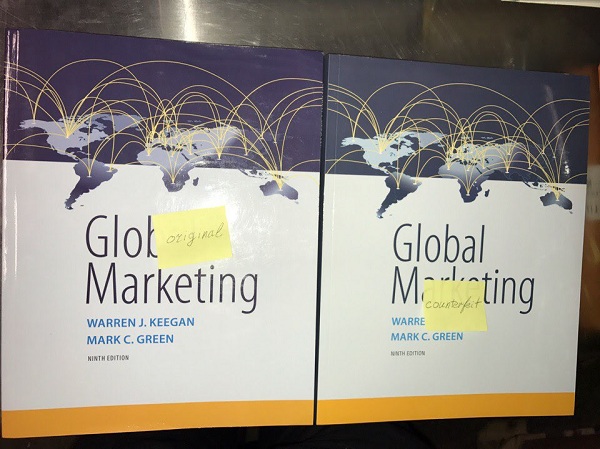 Example #2: Counterfeit item on the right has a different color tone and is narrower (a fake book cover): 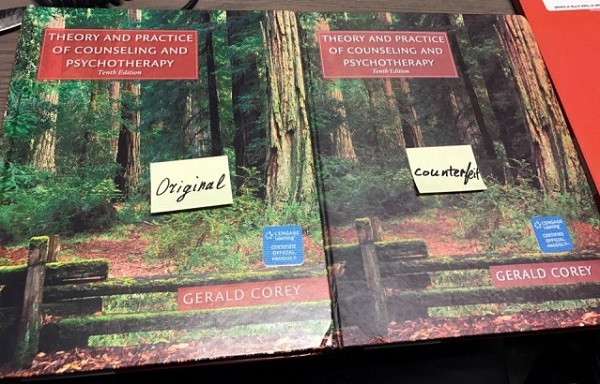 6) Letters. Pay attention to the quality of the print, as in cases of counterfeit, the pages often look cheaper and generally worse.

Example: Letters on the page of the counterfeit book are thicker and not as fine as the original:

7) ISBN. If the book differs too much from other original editions but the ISBN is the same and there are no other markings indicating it's an international or instructor's version, it's definitely a counterfeit copy.

8) Barcode. If you don't have any original copy to compare a counterfeit book with, you may take a look at the barcode printed on the backside of the book. It may look slightly fuzzy, like a photocopy, offset, or even colored a bit (barcodes are usually black-and-white).

9) Flyleaves. Counterfeit books might not include them. The copyright page can also be absent.

10) Headbands may be frayed or have a different pattern or color.

11) Typos. Books are scanned, and their content is copied by special software. However, it sometimes makes mistakes and creates various typos. In the picture below, the fake copy on top has two errors that might serve as an indicator of the book being counterfeit. 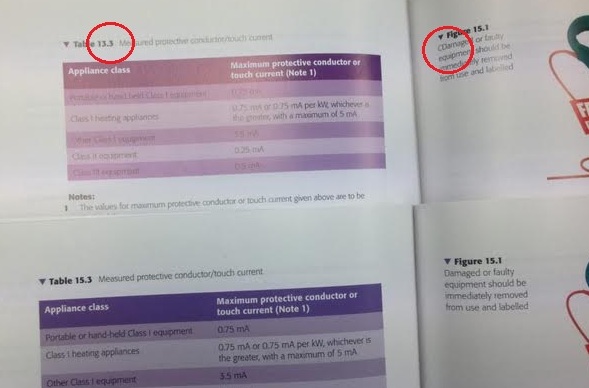 At Textbooks Buffalo, we buy back and sell only legal editions of textbooks.

Book piracy and counterfeiting harms publishers, distributors, authors, and book buyers. Plus, it is illegal. Those whose livelihood is being threatened by book counterfeiting need to come together to protect the book publishing industry from this pervasive threat. In an effort to halt the growing trend, several publishers and distributors have joined forces to raise awareness about the counterfeit book problem and create a set of best practices for detecting and mitigating it. Publishers, including Cengage, Macmillan Learning, McGraw-Hill Education, Elsevier, and Pearson, along with several distributors such as Barnes & Noble Education, MBS Textbook Exchange, and Follett have formed the Education Publisher Enforcement Group (EPEG). Their aim is to outline steps to verify suppliers, recognize fake books, and take measure to remove counterfeit texts from circulation. Best practices deal mainly with distributors, but publishers should be aware of them as well. Best practice guidance covers these areas: “reducing the likelihood of distributors purchasing counterfeits by providing guidance on buying from legitimate suppliers; identifying counterfeit books before they’re put into a distributor’s inventory; and turning over counterfeits and evidence of counterfeit sources to publishers so they can focus enforcement efforts.”

Counterfeit books harm the bottom line and reputations of publishers and distributors, and they infringe on the intellectual property rights of authors. They harm the book publishing industry as a whole, as well as students and consumers. Publishers, authors, and distributors need to be vigilant in slowing the flow of these fake publications. They need to work together to create and improve on methods and technologies to reduce the threat of counterfeit books to the publishing industry.